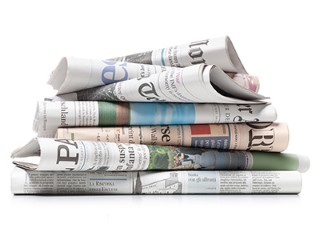 Well, what a splendid month October was, with all the major world stock markets that we cover in this Bulletin skipping merrily upwards. Germany and China led the way with gains of 12% and 11% respectively, and if you only looked at the figures you’d be quite justified in thinking that everything in the world economic garden was rosy.

Sadly, that’s very far from the case. The worries about the slowdown in China continue, the third quarter of the year saw a dramatic downturn in US economic activity, and the International Monetary Fund was busy cutting forecasts for global growth and issuing warnings on future stability.

The IMF downgraded its forecast for global economic growth for this year to 3.1% – down from the 3.3% it had predicted in July. The 2016 forecast was also reduced, from 3.8% to 3.6%. “A return to robust and synchronised global expansion remains elusive,” the bean counters added.

It certainly won’t be assured if the US and China continue with their spats – and the consequent increasing tension – in the South China Sea. China was swift to summon the US ambassador after the USS Lassen ‘illegally’ entered waters near a Chinese man-made reef. Washington was urged to ‘immediately correct its mistake.’ We shall see…

Closer to home it was a disastrous month for the UK steel industry, as cheap imports from China led to the loss of thousands of jobs. The local economies in Redcar and Scunthorpe were hit by blows from which they might never recover.

October saw Chinese Premier Xi Jinping pay a state visit to the UK, where he was greeted with all the pomp and circumstance the country could muster. Even Labour leader Jeremy Corbyn was persuaded into white tie and tails, before describing the evening as “the most boring I have ever had.”

Sadly, President Xi and his entourage weren’t the only things to arrive from China, with the continuing flood of cheap steel prompting Tata to cut 1,200 jobs at its plants in Scunthorpe and Lanarkshire. This followed last month’s closure of SSI’s plant on Teesside with the loss of 1,700 jobs. But bad news always comes in threes, and administrators were duly appointed to parts of Caparo’s steel operations in the West Midlands, with further job losses – both direct and in the supply chain – seemingly inevitable.

David Cameron said that he would raise the matter with President Xi, presumably once the Chinese Premier had signed the deal confirming Chinese investment in the Hinkley Point nuclear reactor – a move widely condemned by UK environmentalists.

Meanwhile, the Prime Minister’s next door neighbour was having a month to forget: George Osborne’s plans for reform of the tax credits system were roundly trounced in the House of Lords – a reverse he will address in November’s Autumn Statement.

There was no such bad luck for Facebook, who managed to get away with only paying £4,327 in UK corporation tax. BP was faced with a rather heftier bill of $20bn, as compensation for the Deepwater oil spill was finally agreed.

The month’s numbers saw UK unemployment fall to a 7 year low of 5.4% – but that was obviously before the job losses in the steel industry. UK inflation once again turned negative, with the figures for September confirming it at -0.1%.

The month ended with confirmation that the UK economy had grown by 0.5% in the third quarter of the year. That was down from 0.7% in the previous quarter but, as many commentators pointed out, it wasn’t a bad performance in the context of the wider global economy. Perhaps more worryingly, the growth was once again generated by the service sector, as manufacturing and construction continued to slip back.

There was no slipping back on the stock market, with the FTSE-100 index of leading shares rising by 5% in November to end the month at 6,361 – although that is still 3% below the level at which it started the year.

The month started with Angela Merkel firmly asserting that the VW emissions scandal wouldn’t harm Germany. The month ended with it very definitely having harmed VW, as the company reported its first quarterly loss for 15 years. After setting aside €6.7bn to cover the inevitable compensation payments, VW reported a quarterly loss of €2.52bn for the third quarter of 2015.

Matters may get worse, with the European Investment Bank apparently considering recalling loans made to the company. VW said it would ‘now re-position itself for the future’ – which in the short term probably means cutting investment.

Deutsche Bank was also suffering as it reported a third quarter loss of €6bn: it now plans to shed 15,000 jobs around the world.

Figures for August confirmed that Germany had suffered the usual slowdown in imports and exports caused by the school holidays. Worryingly, though, exports fell by their largest amount since the height of the global financial crisis in 2009. Germany still recorded a healthy trade surplus for the month, but Holger Sandte, chief European economist at Nordea said, “This is a strong fall, the kind you don’t see every day. Weakness in China, Brazil, Russia and other markets is having an impact.”

None of these worries, though, were reflected on the stock market, with the German DAX index bounding up 12% in October to close at 10,850. There was a similar ode to joy across the border in France, with the market there up 10% to 4,898. Even the Greek stock market moved in the right direction, enjoying a 7% rise in the month.

A Space-Age start to the month, with Facebook announcing that by next year it would have a satellite in orbit to bring the internet to the whole of Africa. Cynics might suggest it will be funded by the tax the company didn’t pay in the UK…

In an echo of VW’s ‘re-positioning for the future,’ perennial social media disappointment Twitter decided to re-position 336 of its staff for the future by making them redundant. This amounts to 8% of the company’s workforce and presaged another disappointing quarter, with user numbers continue to fall below expectations. There were no such disappointments for Apple, whose revenues for the three months to September soared to $51.5bn – up 22% on the same period in 2014.

There were also large numbers at work in the brewing industry, with the two biggest beer makers set for a merger after SAB Miller accepted a takeover offer from rival Anheuser-Busch InBev. The deal is worth around $110bn (so six months’ revenues for Apple) and will see the new company make 30% of the world’s beer.

We’re now just 12 months away from the 2016 US Presidential election, with Hillary Clinton continuing to be the firm favourite. In October she came out against the Trans Pacific Trade Partnership agreement championed by Barack Obama. The trade deal involves 12 countries around the Pacific rim and would cover 40% of the global economy – but Mrs Clinton says it doesn’t meet her ‘high standards.’

The Federal Reserve Bank once again decided to leave interest rates at their record low levels of 0% to 0.25% (where they’ve been since December 2008) as a report from the Fed suggested that the strong dollar was holding back the US economy. This looked to have been confirmed when figures for the third quarter showed the US economy slowing sharply. Growth for Q3 was down to 1.5%, compared to 3.9% for the second quarter.

These didn’t seem to bother Wall Street, however, with the Dow Jones index up 8% in the month to close October at 17,664.

“It’s not all doom and gloom in China,” said head of the IMF Christine Lagarde. And, of course she’s partly right. Double-digit growth cannot go on for ever, and whilst the pace of growth is slowing, it still outstrips the western economies by some distance. Figures for the third quarter confirmed growth in the Chinese economy had ‘slowed’ to 6.9% – below the government’s target of 7% but ahead of analysts’ expectations of 6.8%.

The Bank of China reacted by cutting its key interest rate to 4.35%, a move which sent European stock markets sharply upwards.

Inevitably the slowdown led to both imports and exports falling when the official figures for September were released. Imports were down by 20% to $145.2bn whilst exports also fell to $205.6bn. Keen mathematicians will spot that this still leaves China with a rather healthy trade surplus of $60.4bn.

Unlike Hillary Clinton, China gave a cautious welcome to the Trans-Pacific Trade Partnership.

Across the China Sea there was mixed news for the Japanese economy: job availability climbed to a 23 year high, but there was an unexpected rise in the jobless rate to 3.4%. Consumer spending also rose, up 2.9% on the same period a year ago. The Bank of Japan decided to continue with its monetary easing policy, and this sent shares in Japan to a two month high.

As you’ll have gathered from the introduction, all three of the major emerging markets on which we report saw their stock markets move upwards in October. Russia led the way with a 4% rise to 1,712 whilst both the Brazilian and Indian markets rose by 2%, to 45,869 and 26,657 respectively.

Welcome as these rises are, they’re towards the lower end of the scale for this month, and perhaps confirm that growth in the emerging economies is once again slowing down. The IMF is now forecasting that the world’s emerging economies will see a slowdown in growth for the 5th consecutive year, with a suggested figure of 4% for this year, compared to 7.5% growth in 2010. Inevitably, the blame for this is being laid at China’s door, with China accounting for 30% of the economic activity of emerging and developing economies. As growth in China slows so, inevitably, does growth around the world.

October saw the introduction of the 5p charge for carrier bags in the UK. I hope you’re remembering to take a bag to the corner shop: just to encourage you, here are some numbers:

£10m – the current estimated cost of cleaning up plastic bags

I’ll try and improve next month…

The ongoing war in Ukraine, rising interest rates and soaring inflation could be pushing some economies towards recession in the coming months. This uncertainty has caused real volatility in global stock markets. Indeed, 2022 was the worst first half of the year for developed market equities in more than 50 years. As an investor, you

The intriguing science behind why we sleep

Sleep might be something you don’t give much thought to, but a good night’s sleep is vital for your wellbeing. If sleep is something you struggle with, you’re not alone. According to a YouGov poll, 1 in 8 Brits says they have trouble falling asleep every night. And around a quarter of people say they